The Problem with DeFi Protocols

When a protocol launches its liquidity mining program, the high APR attracts lots of liquidity. However, these liquidity miners only come to farm, withdraw, and sell. This action imposes a high selling price on the protocol's token which further causes the price to drop. The drastic token price fall intimidates those who truly want to commit and grow with the projects. When the protocol reduces or stops the token rewards, liquidity miners will immediately move to other protocols offering higher rewards leaving a dead community behind. Thus causes the death spiral.

This unstable relationship often leads to a lose-lose situation for the protocols and the liquidity miners. Protocols will not nurture loyal and committed communities. 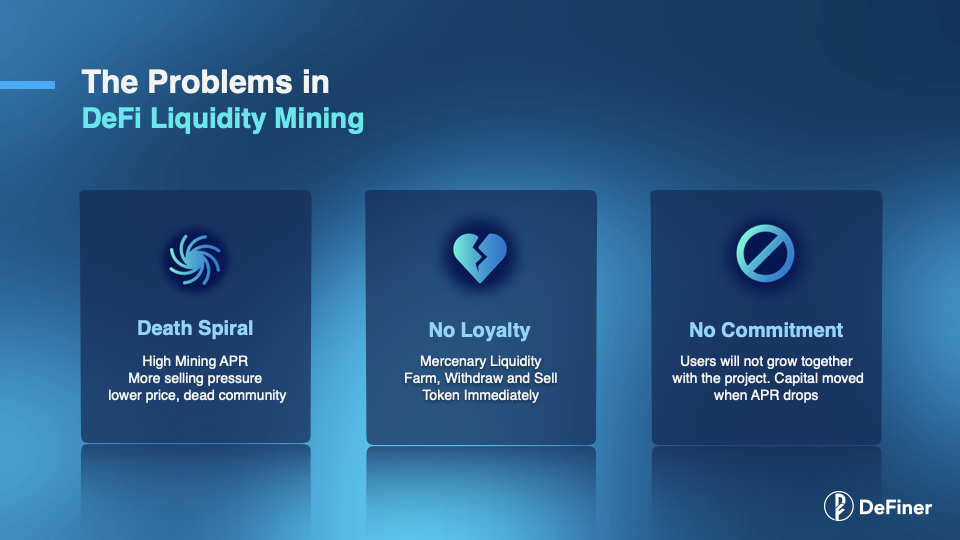 Why Doesn’t Bitcoin Have a Death Spiral?

Bitcoin is a prime example of a token that does not have a death spiral. Evidence of this is that the price of Bitcoin generally trends upward. An important aspect of Bitcoin's positive price action is its reward system: Bitcoin only rewards the committed community members – the miners.

Miners invest huge capital in mining machines and mining farms, and Bitcoin mining itself takes time. All the time and money invested generates a sunk cost which makes it hard to leave the protocol easily. Even if they want to, miners have to consider their opportunity cost. Therefore, they tend to commit to the network, no matter what happens in the next couple of years.

Bitcoin miners represent a group of users who did their due diligence before diving into the protocol. Unlike mercenary liquidity miners, they came for a commitment. They will not leave to another protocol easily.

So, what can other protocols do to find loyal users and avoid the death spiral? 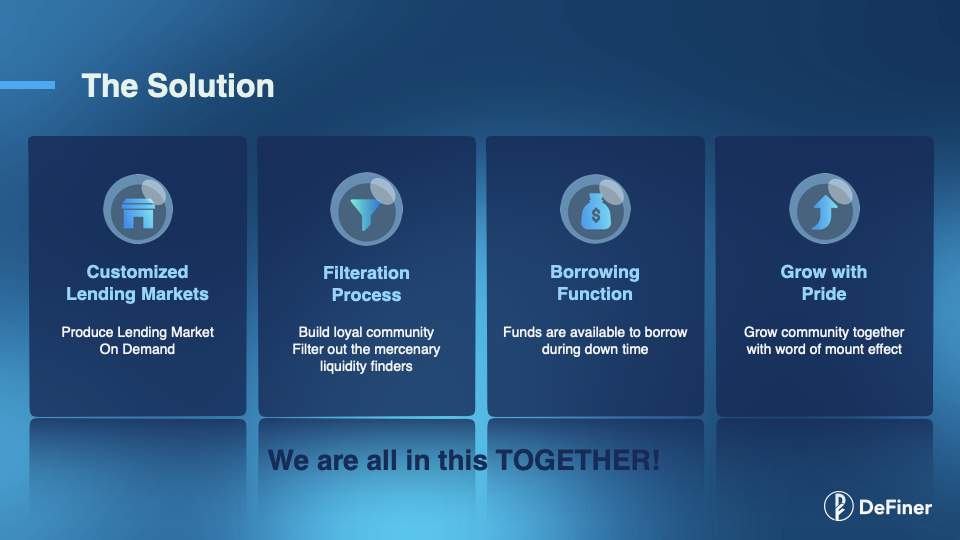 One of the main features of the DeFiner HODLer Market is customization. Projects will have the ability to create a lending market of their own, on-demand. The HODLer Market will have a built-in, configurable Smart Contract Factory that will generate a lending smart contract based on the configurations users input when creating their own lending pool.

Projects have the ability to customize the maturity date for their HODLer Market (such as one month, six months, twelve months, etc.). This mechanism will be beneficial for building a loyal community because it helps filter out the mercenary liquidity miners. Only those who do their own research and want to commit to the project will be staking on the protocol. Instead of farming, withdrawing, and selling, communities will farm, hodl, and promote for the community.

One advantage of the HODLer Market, as compared to purely locking up the token, is the ability users have to borrow. Users can use their locked-up tokens as collateral for a loan against it. For example, when there is a market downturn and users need the funds, they always have the option to borrow the funds on the DeFiner platform.

Grow with the Pride

Once the community feels they are part of the project, they will farm, hodl, and promote the project; thus, avoiding the death spiral.

After implementing the HODLer Market, projects will enjoy a committed group of users and promoters. Since the community has been through ups and downs during the lock period, they will be more loyal to the project. At this stage, both the protocol and liquidity miners will achieve a win-win situation. The project and its community will grow together. No death spirals.

DeFiner is a strong believer in decentralization and DAOs. That's why we will be launching a special program to distribute the HODLer Market profit back to our community. We call it the Treasure Hunting Program.

Upon launching each HODLer Market, there will be a HODLer NFT associated with it. Both pool creators and pool promoters will be rewarded with "treasures" - NFTs that can be a “Gem,” “Sapphire,” or a “Diamond Hand.” These represent the status of the HODLer Club. In addition, treasure owners will be entitled to a certain percentage of the interest earned through the corresponding HODLer Market’s lifespan. 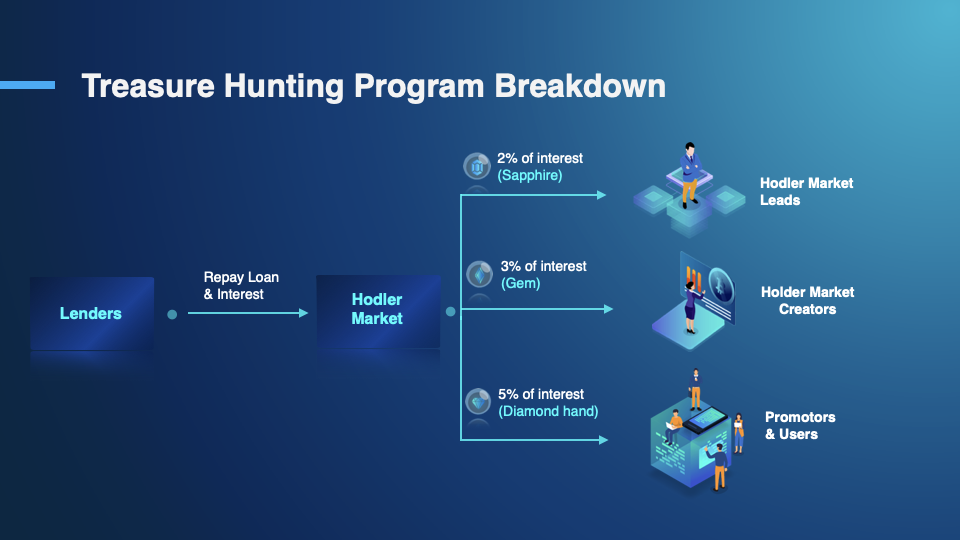 The DeFiner HODLer Market is just the first stage of DeFiner 2.0. Our full mission is to create a truly permissionless, configurable DeFi lending protocol with 100% privacy protection.

For DeFiner 2.0, we plan to introduce even more applications into our ecosystem over time, including NFTs, Initial Loan Offerings (ILOs), non-collateralized loans, off-chain asset-backed loans, fixed-rate loans, term loans, and additional offerings based on community feedback. 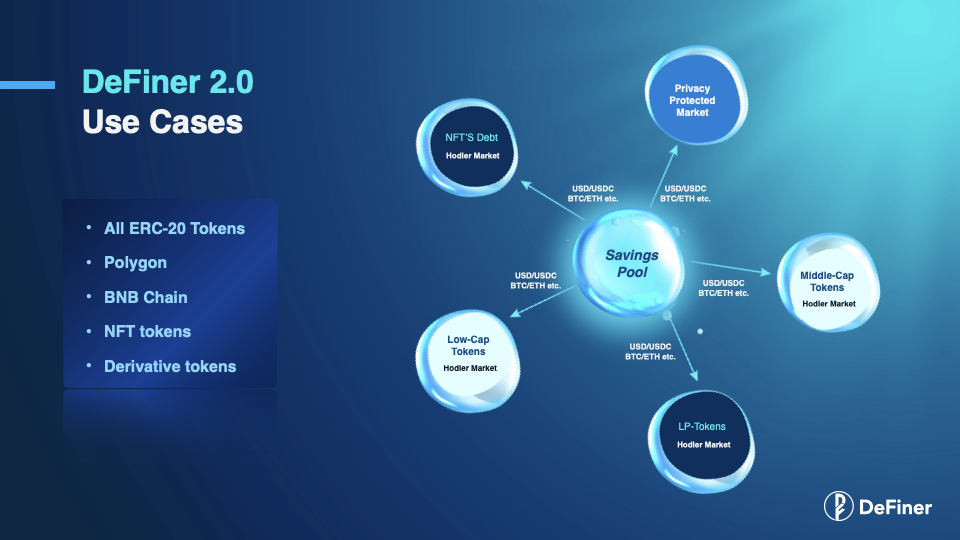 Today’s mainstream DeFi lending protocols support less than 50 crypto assets, yet there are more than 15,000 tokens in the market. DeFiner 2.0 provides a near-perfect solution to this problem and is designed to bring a true form of decentralization to the global DeFi ecosystem. We want to provide the infrastructure and enable anybody to create a lending pool of their own.

Can’t wait to create your first HODLer Market? Testing is now available for our launch partners. If you are interested in getting early access to the HODLer Market, please reach out to us on our  Telegram Channel or Discord Channel.

Tags: Announcement, About Us