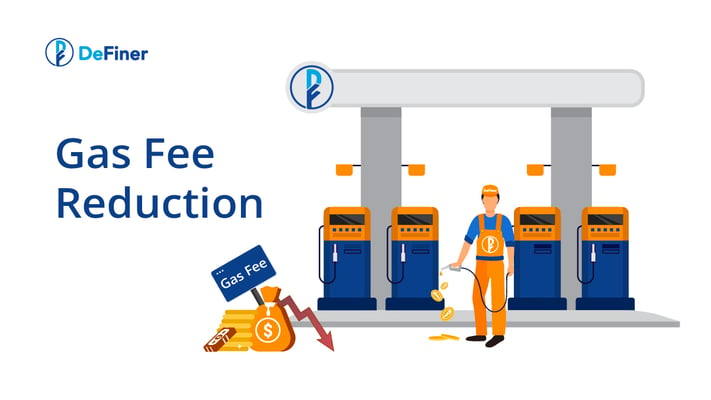 Even though we are reaching all-time highs for Ethereum, the DeFi community has long been suffering from the high cost of gas on Ethereum for the last few months. Unfortunately, this has priced out many retail investors from using DeFi.

Because of this, DeFiner’s team was tasked with trying to solve the ETH gas crisis.

And the good news is, we did it! DeFiner is happy to report that we have been able to reduce the gas cost to almost 50% in some cases!

How We Did It

Our CTO, Hilal Al-Hilal, explained that he and his team were able to reduce the cost of gas by reworking the DeFiner code. The team did this by first focusing on reducing the expensive cross contract calls in two ways:

1. Code calls were analyzed and the code was moved to the contract where it was most used, instead of making cross-contract calls.

2. In certain cases, the code implemented a loop to iterate through a list of tokens and get values of each token, in effect making a cross-contract call for each token. This was simplified to one call to get the values of all tokens at once.

Check out the chart below to see the results of our testing:

Ethereum’s gas prices are decreasing today because of the Berlin Hard Fork upgrade a couple of weeks ago, which helped mitigate the high gas fees we are seeing today. Although the cost of gas is becoming affordable, DeFiner also announced last week that we will be offering multi-chain support too, with OKExChain the first to launch this coming month!

And just in case you missed it, we announced DeFiner 2.0 last week, a permissionless debt market with multi-chain support and with the goal of launching on multiple chains this year, including Binance Smart Chain, Solana, Polygon, Huobi Eco, and TRON!

So head over to app.definer.org and use DeFiner to earn some of the highest APR yields in the ecosystem!